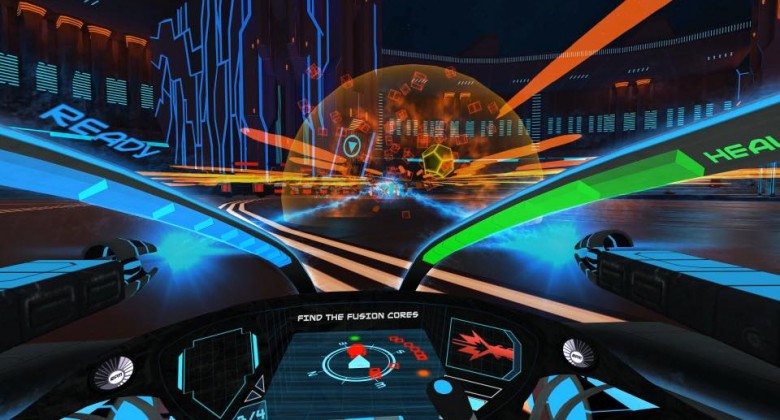 GearVR, Oculus Go, Daydream... they all allow for some decent and affordable ‘mobile’ TRON-like experiences. Among them are the following available right now. First, let's mention some history. Here at Gaming Impact we've shared a dream to drive our own glowing tanks someday from the 1980’s film, escaping the Space Paranoids. It was like the world was waking up to its new love affair with technology and the rise of home computers (and games), beyond the arcade machines. The character Flynn in this visionary Disney experience suddenly made being a computer geek – and gamer – very cool. Even today this film still pulses with energy and originality (check out the Making of TRON film).

Thirty years on, and despite having a weighty headset on our faces and feeling like we're underwater, we're now the closest thing to feeling integrated with the technological world. At least, we can see an amazing, glowing tank all around us.

Back to this tank in a moment but first… to the discs, which unfortunately are not as good-looking as the 'Identity Discs' every 'program' must carry inside the computer world of TRON. 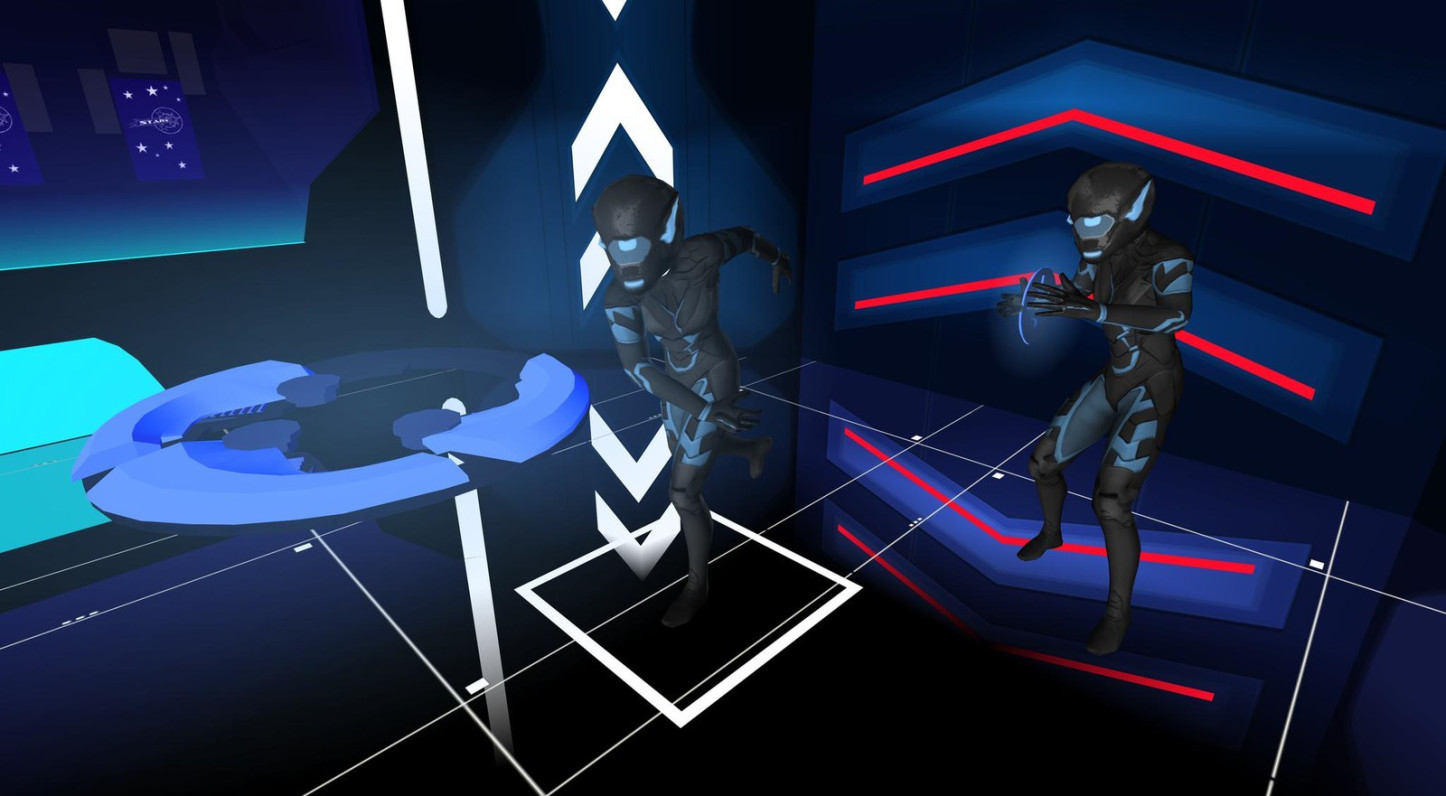 This app is just fine for a blast. We're not sure about the dodgy dance routines of the avatars, but when the game begins you’re facing off against these disc-thrower(s) with one object: to frisbee your disc straight at them and to eliminate them. Supposedly, the dancing is just to make it more satisfying when you win. This can be achieved with only 2-3 good hits (and it’s a shame we don’t get to see any ‘de-rezzing’ special effects, although the referee has a voice just like that of the good ‘ole M.C.P).

This is a small, fun step towards a far better experience that hopefully will arrive someday, since the main problem here is the throwing of the disc. We probably needed more practice, but without proper tracking the blocking too feels a bit rough. It’s still worth playing as the avatar walking is simulated acceptably otherwise using the controller. The AI is pretty good too, and it lets you play singles and doubles. At one point we got eliminated first and watched with interest as the computer ‘programs’ fought themselves to the end.

This game has some nice-looking arenas and some decent gameplay. You have two viewing modes to select: first-person and third (the latter might relieve any motion sickness). The scope of gameplay is increased by multi-user battles locally or on the internet. With this kind of game, however, I’m sure that the room-tracking properties of the HTC Vive would be more worthwhile. But at least we can get a nice idea here for now, and a taste of the TRON universe. 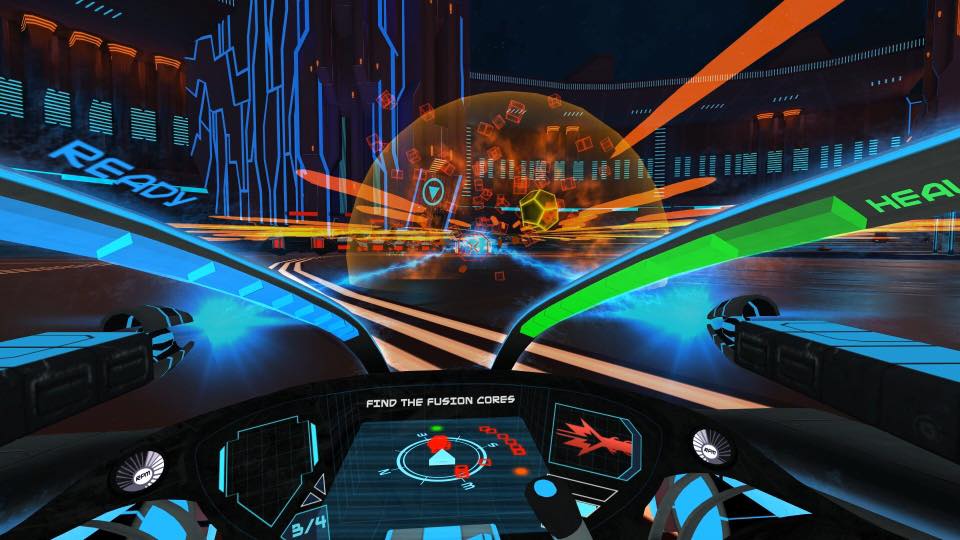 Ok so back to the tank dream. Problem here? The controls. These take a little getting used to. However, after about ten minutes you’ll begin to get a grip on what proves to be a vibrant taste of an involving VR exploration shooter. We had to stand up to get more involved with this one. You turn your head and the cannons adjust. You throw your arms down and your vehicle turbos off across glowing platforms and transparent ramps. We'd just love to try the multiplayer feature but there’s no-one at home on the server and there's only one headset to go round. [Note: must try this as we're sure multiplayer would be great here, maybe one person on GEAR VR and one on the new OCULUS GO?]

Also, this whole experience just needs to get a little better, ie. get full TRON endorsement with even more atmosphere, varied enemy classes (i.e. Space Paranoids!) and, of course, 2-player co-op inside the tanks. The developers for now have still done a good job, and the visuals are decent.

Improvement with the controls and being able to customise the tank would add some much-needed depth. Nevermind... the future of amazing co-operative VR games will come. For now, this is worth a good turn and something gamers would've loved to have witnessed back in the 80s! 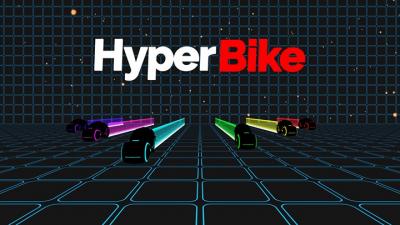 Simple and effective, this one sticks the closest to the 1980s film and the Light Cycles of the Game Grid. Therefore, it’s without graphical frills, so both key elements are rendered pretty simply. However, that’s not to say this isn’t worth downloading. In fact, it hits the nail on the head. Fast and furious, the driving is fluid and for some moments you’re right there, inside the movie, hunching over. We just wish the sound of the cycle was powering in our ears and the special effects were even more like the film. Also, how long you’ll spend replaying such intense motion is another matter. For us, we played eight or nine sessions, and won most of them (maybe because we understood the point of the game: stick closely to the edge and wait for your opponents to gradually get wiped out or trapped in their own trails, leaving you the last bike on the grid). We didn’t even have to use any of the extra/shield weapon options which feel like they’ve been thrown in for good measure to try and enhance any excitement. They don’t work very well for one thing. The Light Cycles were always about speed, and you’d have to slow the game down in order to use these more effectively, or at least give us that option?

Multiplayer: There is a mode for this and we stayed waiting some time for nobody to show up. However, if you had 2 devices this could work well. Overall, we'd only recommend this Light Cycle experience as we wait for a much better one, that doesn’t feel limited by the GEAR VR control tools themselves.

...these titles are all worth a look. Which one would we actually fire up a second time? Well, we're more seasoned gamers, so we're harder to please, but we'd get back in the tank, Fusion Wars, because there’s the promise of more environments and more intelligent enemies to discover. It’s more of a classic arcade-style shooter, only this time it’s very close and intense. All three of the above titles have lots of room for improvement, and are restricted mainly by controls either being over or under-used.

Let’s hope we’ll see a Space Paranoid bearing down on us soon. For now, this is no ‘end of line‘, but a promising start as we truly begin to enter ‘the other side of the screen.’ But please, let’s hope we get a definitive TRON VR game some day, all you up-and-coming VR game developers out there.

We'll do our best here at Gaming Impact to keep you in the loop, Programs!