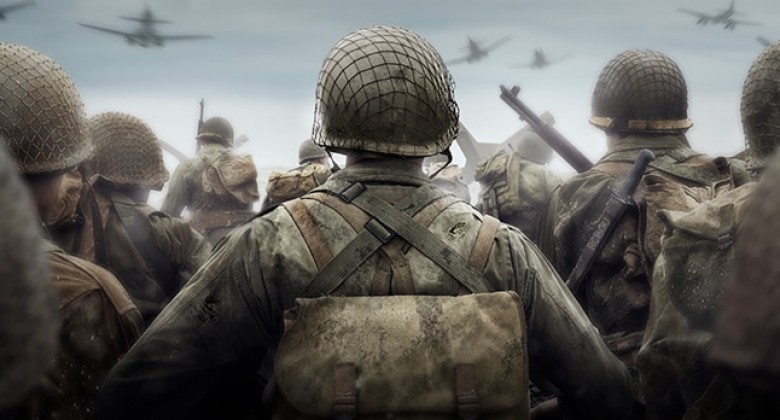 Maybe you’re just looking to get immersed again into the narratives and reconstructions of famous battles, from the liberation of France to the drive into Germany, from the comfort of your sitting room.

Perhaps you’ve been watching too many WW2 movies, of which there are many that feel like video games themselves at times... Saving Private Ryan, The Thin Red Line, Pearl Harbor, Enemy at the Gates etc. etc...

Well, we’re here to help. There have now been many impressive titles released that have re-created such terrible theatres of combat as the beaches of Normandy to those final, intense street-fighting days in the shattered streets of Berlin.

So let’s load on up and take a look through the (still recent) titles which offer a high-octane or intensive workout for your mind, thumbs, game-pads, TV screens and gaming machines...

Updated in glorious graphical detail comes a varied single-player campaign with clear influence from the Uncharted series (think thrilling, interactive cut-scenes). The franchise re-visits this period since their early titles, which made Call of Duty so well known. This time, you'll need your comrades to pass you medical, grenade and ammo recharges. By the end of this campaign, you'll feel more than just a little shaken by the demands and horrors of World War 2. (And watch out for that pretty awesome train-crash sequence).

Further and extensive DLC packs have added considerably to the longevity of this title.

FPS games with a focus on multiplayer are what DICE games do best, and here World War 2 arena benefited from their fluid and vivid work. However, we also get a worthy single-player campaign from many theatres of combat (since fans were hoping this wouldn’t be left on the sidelines).

Despite following quite close after Battlefront 1 (WW1) and Star Wars titles, (and despite the modern, injected ‘diversity’ aspects distracting a little from the authenticity) many were agreed that something more innovative could have been achieved here, but of course this still makes for an engrossing, action-packed experience. Also, the War in the Pacific (see trailer above) DLC etc. further redeemed the title.

Now we move to this WW2-set series from Rebellion, which concentrate on offering a more tactical and patient single-player experience (like the Russian snipers of Stalingrad, as depicted in movies like Enemy at the Gates).

Progression through the scenarios must involve correct stealth and planning. Multiplayer is also available in these titles, in terms of co-operative mode, where friends can progress through the levels together. This is also very effective in other modes such as co-operative survival.

Karl Fairburne is the protagonist as usual here, sent this time to Apennine Peninsula. With greater freedom as to how missions can be achieved and a large sandbox of maps, the behavior of bullets in different weather conditions can even be mastered.

Featuring similar mechanics to the original successful title, only this one's set in a different and still gripping theatre of World War 2.

Some greater freedom is allowed to players for executing missions successfully, with more 'open map' layouts and possibilities to choose from, or concoct.

Perhaps the best of the series in terms of scenario, this is a remastered version of the hit 2012 tactical shooter set in Berlin at the end of the war. The much-anticipated DLC allowed Hitler himself to be assassinated in another well-designed level.

Patience, stealth, skill and the richly realistic atmosphere will bring you closer than ever to an experience of World War 2.

Fortunately re-mastered for PS4, this allows the game to live on even longer, enabling fresh players to discover it at a decent price for a good while yet.

Of course there are many other single-player campaigns set in World War 2, particularly from the earlier, classic Call of Duty and Medal of Honor series, which unfortunately now require earlier systems or PCs to experience.

Some of these campaigns were incredibly well designed and executed before multiplayer really began to take over gaming, and particularly console gaming. We can only hope these campaigns and maps can be resurrected for streaming services or re-released for latest console machines, such as the following Medal of Honor, which was set in the Pacific:

So, that’s it, marine... for this round-up of rich, immersive World War 2 FPS gaming action.

God-speed in your campaigns and hold on to your helmets for more here at Gaming Impact.

Meanwhile, our host of free-to-play games are here right now to occupy you, directly in your browser, without any download or waiting around.