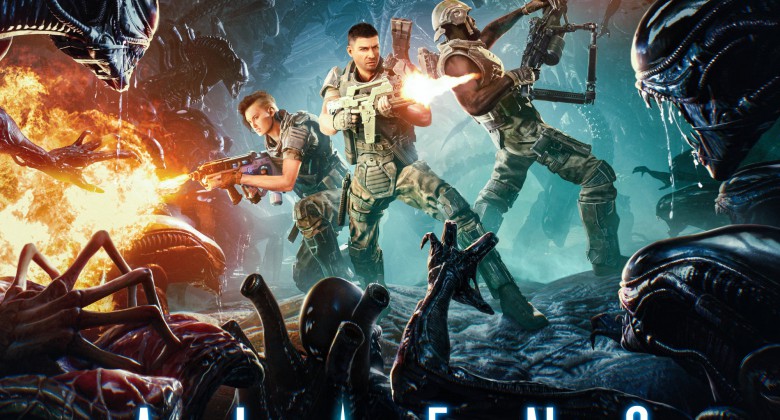 Ok, so let’s say you’ve just finished watching one of the best cinematic action (and 'horror') masterpieces ever made - James Cameron’s Aliens. It also happens to be an anti-war, anti-technology ‘allegory’ hidden within its science-fiction setting and sequel. He did this with Avatar too, a little.

The star of this non-stop intense 1980s movie is not your average Bruce Willis or The Rock. Instead, the film leads you into its dark interior where you simply find two mothers - one human and one insect-like alien - fighting for territory and survival. The story becomes a raw tale of courage and self-exertion. Of course, we’re rooting for the humans (not the idiotic, greedy or corrupt ones), but there’s a real fascination and respect for the gruesome, egg-laying queen who’s running the show from the heart of this abandoned colony planet. At least you know where you are with her.

Now then… you’re looking to get closer to that gripping action experience and spend more time in this universe - if you’re sure!? But what game do you play? Alien: Isolation has some ‘terrific’ level design (and is also a brilliant homage DLC to the first Alien movie) but… it’s just too scary for most people, but it certainly re-creates the survival and essential stealth aspects.

But what about… action? What about the space marines? Doom is a very wholesome alternative, but there’s just no Aliens atmosphere. There’s just no… Aliens.

It’s only after you’ve downloaded Aliens: Fireteam Elite, that you begin to feel eager to pitch yourself against the ‘hordes’; to make contact on your first bug-hunt. You fiddle around with the weapons and are happy that the mechanics are similar to most other shooters. Even better, the gear and armaments are all true. The pulse rifles sound the same. When you’re thrown quite quickly into your first mission, it’s only then that you feel that sense of dread….. Yes, this is the closest thing to being a marine. You hear the ping of your motion tracker, as it attempts to sense nearby motion…. It’s then that you begin to re-think your eagerness, and if you really should go up against the hordes. What were you thinking? It’s a horror game after all.

When they attack, the experience isn’t as cinematic as you’d hoped. In fact, the atmosphere is lacking. However, instead Fireteam Elite becomes something different quickly: a gripping, strategic shooter. What follows is the need to really shoot your pulse rifle - a lot - and to start managing your weaponry.

From this point onwards, players of Aliens: Fireteam Elite will get sucked deeper and deeper in. There could have been a little more cinematic atmosphere, a little like, in fact, Ghostbusters - Remastered, where cut-scenes mix with narrative. Instead there’s been this focus on shooting hordes of aliens which never relents in keeping you on your defensive. It’s also about working with a team. And this it does, really well. The game has a chance of becoming an ultimate space co-op shooter.

You’ll need to assess your area and set up turret guns in the right places, to take the pressure off your team and your ammunition. Finding ammo is of course always important. You’ll get good at finding it, and better at managing many things, and at shooting the attacking Aliens. There’s always the prospect of a close encounter, where you’ll need to switch to shotgun etc, - and this prospect serves to keep you on your boot-toes. The way the game makes you look out for your team, really pushes the game to another level: that of an exciting co-operative shooter.

So… for you die-hard Aliens fans out there who might have been putting off getting this game - go get it, and renew your multiplayer subscription too. This one's a keeper. Committed developer Cold Iron Studios has a 1-year roadmap featuring multiple seasons coming, plus new weapons and game modes. You’re going in, and you’ll need to stay frosty until it really is over.

Meanwhile, check out Gaming Impact's horde of mini-games and our Top 20 browser games which you can play directly for free, that's right, in your browser.