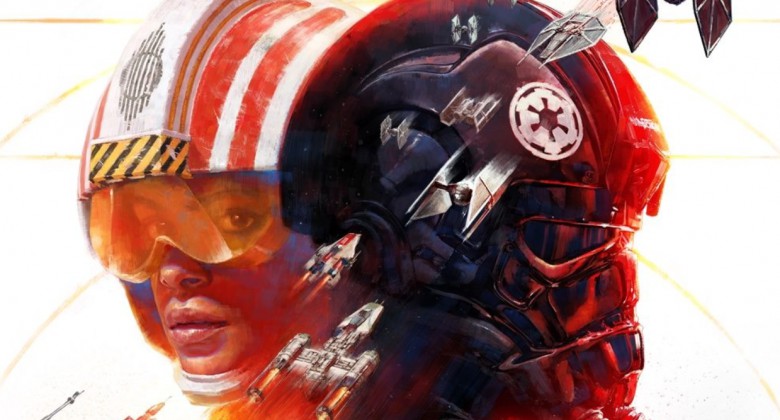 Gaming Impact has intercepted this title of course, and has inspected what's in store. First however, let's spare a thought for former legacies...

Back in the 90s, over-inspired sci-fi fans and PC users particularly were treated to Star Wars space combat titles like X-Wing from Lucasarts - which were limited and frustrating to say the least. Like most PC games back then, the missions were way too hard, especially since the whole PC was just as liable to crash back into windows anyway - or freeze completely. But... there were revolutionary elements which provided a big taste of possibilities to come. Suddenly, we were able to manage the distribution of energy throughout our star-fighter. We could direct energy from weapons to deflector shields at critical moments. And some of the missions were pretty decent.

Still, many of us were more at home playing single-player campaigns with alternative endings as in Origin’s Wing Commander, against the Kilrathi. (The game box even arrived with starfighter blue-prints you could pin up in your bedroom!) Or we lapped up the more movie-style, graphical reconstructions of famous battles in X-Wing: Rogue Squadron.

Since then, more recently, we’ve had some awesome space-sim battle experiences thanks to Star Wars Battlefront(s), even including a special mind-blowing PSVR mission. The potential was there for a uniquely immersive way to enter the Star Wars galaxy.

And so... now it looks like those earlier titles and shadowy possibilities will be fully justified and come vividly to life at last. Only just released is new footage from Star Wars Squadrons teaser trailer. Will space dog-fighting be changed forever? It doesn’t get much more immersive than this...

With a deep, single-player story campaign mode set just after Return of the Jedi, it looks like the action will be more controlled with a focus on five-strong squadron teams. At last, it will be time for 'all wings to report in.'

‘Fleet Battles’ will be the online multiplayer mode, featuring PvP battles, and where in the final stage your team will be able to take on a capital ship.

As is expected with Star Wars titles, you’ll be able to fly most of star-fighters (eight or so) featured in the movies, and play on either side of the conflict. Each fighter will have its own strengths depending on situations.

And… for the first time, the entire game can be played in Virtual Reality, which let’s face it really lends itself to space combat sims, but with high hopes the quality can be sustained.

The footage is jaw-dropping to say the least, and Star Wars fans will have to select their real-world squadron team-mates carefully! Who’ll be the Red Leader?

Let’s hope Star Wars Squadrons will truly prove to be the ‘definitive’ space sim and provide a good, 'golden' balance of: narrative-driven excitement, fighter management, co-operative team-work and close encounter mayhem. Plus other in-game random happenings which always boost enjoyment and Youtube ‘stream-abilty’ of any game.

And… perhaps this will all lead on to a dedicated, first-person, Millennium Falcon-centred game too? Let’s face it, X-Wing: Alliance needs its proper update too...

The game is scheduled to launch in early October for $39.99 on PlayStation 4, Xbox One, and PC via Steam, Origin, and the Epic Games Store. It will be compatible with PlayStation VR and PC VR systems, including cross-play support across all platforms.

While you wait for Star Wars Squadrons, here at Gaming Impact, you can play our range of free-to-play instant browser games, and also dazzling array of mini-games, which include space-themed blasters, fun but ever-challenging!