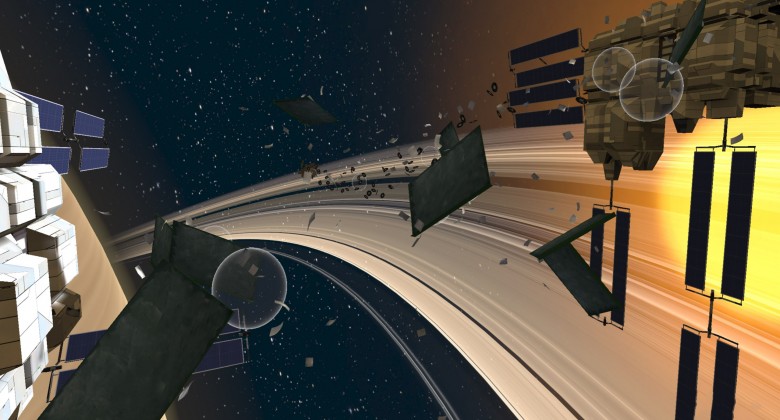 Virtual Reality gaming is improving thanks to the new range of headsets and the latest game development. Fortunately, this development is still trickling down to the Samsung GEAR VR headset, which retains its advantage of leveraging your existing mobile phone and which can be taken anywhere.

Space games are particularly suited to VR right now. Maybe it’s something to do with the current state of headsets: you feel like you’re putting on a kind of space helmet and exploring alone the vast, early frontiers of VR power and potential.

So let’s take a look through the Oculus store at some of the best VR games or space experiences you can add to your trusty in-headset library, forever. You don't have to keep the apps installed on your device, as all your purchases are recorded, and can be downloaded again in the future.

This is a truly beautiful blend of exploration and narrative. Using your pure power of exploration and observation, you must get to the bottom of what’s going on. From the outset it’s all about the visuals and surroundings, but then the power of the storyline takes over and will grip your attention throughout. This includes exploring every moon orbiting Jupiter and Saturn. Developed using Unreal Engine, which can be quite overwhelming for the senses in terms of aethetics and sheer scale.

The emphasis here is also on the beautiful - but hauntingly vast - nature of space. Again, finding out what happened to a spacecraft like your own is the name of the game. This time we're probing into the heart of a mysterious asteroid. However, let’s just say your trip will end unexpectedly and be replaced by something rather hellish. It’s a very cinematic experience, but it’s intense, visually stunning and worth the small fee.

Desirium: Moon: The Dark Side

There are plenty of experiences within the Desirium app, from beginner fun level to expert (more interactive) with more being added. Moon: The Dark Side can be found under Expert, but that doesn't mean it's difficult. Your mission: find out what the heck happened to the moon colony. Fragments of space waste lie abandoned everywhere and it’s your spooky job to explore while at the same time ensuring your oxygen levels are satisfactory. In fact, better make that last one a priority.

Once you’ve mastered the controls (which doesn’t take too long) you’ll enjoy them, including the sensation of moon jumping. Graphics may be better, but they create a good atmosphere of being alone and - at various moments - like being at the bottom of the sea, confronted by vast but ominous wreckage looming out of the darkness of space.

This one’s a bit of a classic and a great starting point. Buckle up and enjoy the authentically replicated, bumpy flight of being blasted through the Earth’s protective atmosphere, which is there for a good reason, shielding us from lots of deadly things including the sun, but which no longer protects space from… us!

Time to get real about space. This one does exactly what any keen space fan would want: provides an in-depth virtual tour of the International Space Station. You have to get a bit familiar with the movement and orientation, but then... so do the real astronauts. Once you do you’ll find a wealth of information and video content available that brings it all home. This app is essential for NASA followers and for understanding space technology today. Thanks to informational videos in-app around the station, it explains it well for the layman too. Of course, the Earth observation module is essential to get to, once you're aboard.

If you’re looking for a VR space shooter for your Samsung GEAR VR, then this one will do the job. As VR games go, it’s not bad at all. You climb into a spaceship and before long must blast your way about an asteroid-cluttered battle scene.

There are a lot of 360 movies appearing and some will start to capture space with VR cameras. Unfortunately the quality is just not as good as the custom-made VR apps above, but this can also depend on your internet connection (remember to set quality to 'highest' while viewing).

Try voice-searching in the Youtube360 app (in-headset) for ‘Cool VR Walk on the Moon with NASA’  which gives you a 3D panorama on the moon from actual space photos, and plays actual footage of the astronauts exploring the moon while you’re there. You’ll have to sit through a rollercoaster video first, but that’s not too bad either(!)

There are tons more game experiences for Oculus Rift, Go and Quest headsets, everything from infamous Alien: Isolation to Lone Echo and coming soon... No Man’s Sky VR which will surely pump the atmosphere and awesome spectrum. In fact, flight simulation in general has never reached these heights before. These are perhaps less for the faint hearted or reality-focused scientists, so if you're more like this, then we suggest sticking to more mobile space content and videos. Or visit the Science Museum in London for a VR experience like this one:

One thing’s for sure as you finish up this roundup of VR space adventures… space has never felt so close to home until Virtual Reality ‘arrived’ recently. It sure is (now) a good place to start your (13+) kids dreaming and reaching for those real stars. But don't miss out on the virtual frontier of 'inner'-space exploration either!